Congratulations to all who participated in the preliminary round of the 2020 ITA Solo and Ensemble Competitions! Due to the worldwide COVID-19 pandemic and subsequent cancellation of the 2020 ITF, the ITA has made the decision to designate all competition finalists as “Co-Winners.” While we are unable to showcase these outstanding musicians at the ITF, we are happy to utilize this webpage and social media to introduce our membership to the 2020 Co-Winners as well as the winners of the Remington Trombone Choir and Kai Winding Jazz Trombone Ensemble competitions. 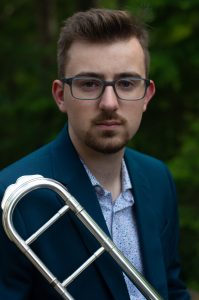 Interested in both studio engineering and composition, Jered is currently pursuing a career in Jazz and Studio Performance, and performing with prestigious groups such as the Stamps Jazz Quintet and the University of Miami Concert Jazz Band. During his time with these groups, he has had the privilege to work with and play with Maria Schneider, Greg Bisonette, Bryan Lynch, Dante Luciani, Dafnis Prieto, Ingrid Jensen, and more. In his free time, he enjoys listening to different styles of music, composing new works, and engineering studio sessions for his friends.

Listen to Jered perform his original composition “Waltz No.7”

Originally from Albany, NY, Joe Giordano is a trombonist, composer, and bandleader based in New York City. He currently studies at the Manhattan School of Music under the tutelage of Marshall Gilkes and Marc Cary. Giordano was inspired by his father, Mark, a trombonist and educator in his own right who introduced Giordano to jazz as he first picked up the trombone. As he continued to grow, Giordano became enamored with the sounds of JJ Johnson and Curtis Fuller. His list of heroes and influences has expanded to include literary geniuses such as William Blake, Carl Jung, and Ta-Nehisi Coates.

Since moving to New York City, Giordano has performed with many key voices on the scene, including Frank Lacy, Bobby Sanabria, Stacy Dillard, and Davis Whitfield Jr. He has performed at venues such as Smalls, Dizzy’s, Clement’s Place, Newport Jazz Festival, and with the Jazz Exchange. In addition to being a Vail Jazz Alumnus, Giordano was named a YoungArts Finalist in Jazz in 2018.

Giordano is fortunate to be in collaboration with exciting up-and-coming musicians in both Beehive Quartet and his own band, the120__. Beehive Quartet’s first record is currently being mixed for release, while Giordano has plans to record his first album of original music in the coming year. He intends to further establish the trombone as an integral part of the scene and deliver a healing message through the lens of creative music. 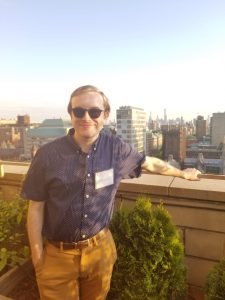 Trombonist Jack Kotze has been living and freelancing in New York City since 2016 when he moved there to study at the Manhattan School of Music. Since then he has performed and recorded in numerous big bands, jazz combos, funk/soul bands, theater pits, chamber ensembles, and symphony orchestras. Jack is in the process of writing new original music and developing his own musical projects. His composition style mixes influences of jazz, funk, R&B, and classical genres. Born in Chicago, he began piano studies at age 7, and at 10 took up the trombone. In 2014, Jack was awarded the Kiewat-Wang Mentorship Award from the Jazz Institute of Chicago which gave him the opportunity to study with highly acclaimed trombonist and arranger Tom Garling.

Some of Jack’s recent accomplishments include attending Betty Carter’s Jazz Ahead program at the Kennedy Center in 2018, being named a YoungArts jazz finalist in 2017, and performing in the Monterey Jazz Festival’s Next Generation Jazz Orchestra and the Grammy Band in 2016. In addition to these accomplishments, he was also named a finalist in the International Trombone Association’s Carl Fontana jazz solo competition in 2019 and a co-winner in 2020. Jack recently graduated this past May from the Manhattan School of Music and will be returning in the fall to pursue a graduate degree. He has been fortunate to study with Marshall Gilkes, Luis Bonilla, David Taylor, and Ingrid Jensen during his time there. Besides music, Jack also enjoys running, biking, movies, video games, and cooking!

Watch Jack solo over “I Hear a Rhapsody” 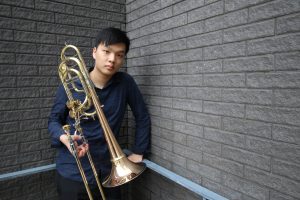 Ivan Cheung is from Hong Kong and is currently pursuing a Bachelor of Music degree in bass trombone performance at The Hong Kong Academy for Performing Arts, where he studies with Zachary Bond. He has also attended masterclasses with world known trombonists such as Joseph Alessi, Sam Armstrong, Marques Young, and Jörgen van Rijen. He is an active performer in Hong Kong and has performed with the SAR Philharmonic Orchestra, Pan Asia Symphony Orchestra, and Pro Arte Orchestra of Hong Kong. Ivan has also collaborated with renowned artists such as Jörgen van Rijen, Steven Mead, Nabil Shehata, Jahja Ling, and the horn quartet German Hornsound.

In addition to his music career, Ivan has also developed an interest in hand drip coffee. He believes that mastering the process of brewing a nice cup of coffee is similar to playing the trombone, as both require nuance, consistency, and patience. 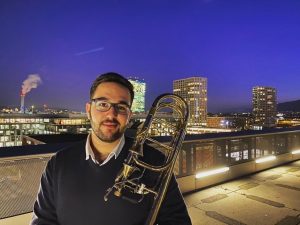 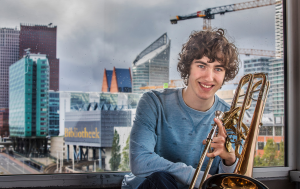 Pelle van Esch is from the city of Gouda in the Netherlands. As a ten-year-old, Pelle shined at Amsterdam’s Concertgebouw with his own composition, “Strange Birds”, in the New Year’s Concert of the Netherlands Wind Ensemble. Three years later he repeated this feat with “Orphan.” In 2017 his work “1967” was awarded the second prize at the prestigious Prinses Christina Concours for composers. Among others he has composed for Joseph Alessi and Tania Kross. He recently composed a concertino for bass trombone, “Homage to Gershwin,” that he performed with the Hague Philharmonic Orchestra.

As a performing artist on bass trombone Pelle is even more successful than as a composer. He has won prizes in several (Inter)national competitions. At the Alessi Seminar Italy 2018 he outshone nine highly qualified, professional bass trombonists (some were twice his age) at a mock audition.

Pelle was taught by his mother Ingrid, Pete Saunders and Sebastiaan Kemner. Besides bass trombone he also plays tuba, tenor trombone and euphonium. Currently he studies at the Royal Conservatory in The Hague with Reza Namavar (composition) and Ben van Dijk and Brandt Attema (bass trombone). In the past years he followed masterclasses with Joseph Alessi, Ian Bousfield, George Curran and Stefan Schultz.

Pelle is an active member of the Dutch Youth Orchestra and Young Trombone Collective. He is very much in demand as a soloist and he likes to surprise audiences with both the power and the subtlety of the bass trombone. He is supported by the Foundation Classic Young Masters, which actively supports his development as a composer and performing artist. 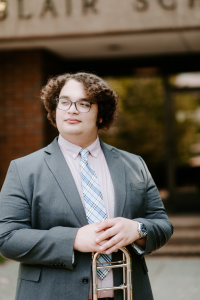 Jonathan Salcedo is a student at Vanderbilt University where he has been studying Trombone Performance with Jeremy Wilson, Associate Professor of Trombone and Nick Laufer, Adjunct Professor of trombone. His other principal teachers include Dr. Bradley Edwards, Steve McAllister, Leslie Pozo, and Shea Marshall, with whom he studied piano and harmony.  He has also taken lessons with the world-renowned jazz trombonist Bob McChesney.

Recently he won Division 1 of the 2020 American Trombone Workshop Solo Competition. An avid fan of jazz and contemporary musical styles, Jonathan has performed with such acts like the Nashville Symphony Orchestra, Willie Gonzalez, and the New Guard Big Band. In his spare time, he finds himself playing piano, composing, and experimenting in the kitchen! 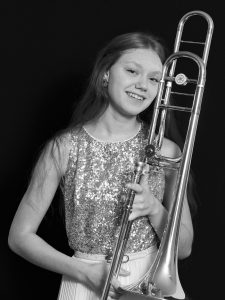 Polina Tarasenko was born in 2001 in Kherson, Ukraine. She began her musical life at the age of 5 in the usual music jazz section for children of the Kherson Palace of Pioneers with her first teacher Semyon Ryvkin. Her first music instrument was drum set. Then she started to play saxophone, trumpet, trombone and piano. She graduated from Kherson music school №3 in 2013 (classical music). Polina was invited to study (2013-2018) at the Moscow Secondary Special Music School named Gnesin with the main specialty trombone and 5 electives – piano, saxophone, trumpet, organ, composition. Her trombone teacher was Alexander Nyankin. After graduating from Gnesin school with honors in 2018, she has studied classical trombone performance at Hochschule für Musik, Theater und Medien Hannover in the class of the professor Jonas Bylund. 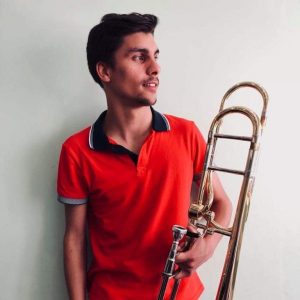 Prior to his success in the Robert Marsteller competition, he won the 1st prize in the Paços Premium competition (2019), and he won the 2nd Prize in the International Trombone Competition, category III (2016.) In May 2020 he was also selected for the Summer and Season Internship with the Symphony Orchestra Biel Solothurn. He has also performed in ochestras such as the Jungend Sinfonie-Orchester Zürich and Schweizer jungend Sinfonie-Orchester, working with conductors including Benoit Fromanger, Fernando Marinho, Maxime Tortelier, Rafa Albors, André Granjo, and José Eduardo Gomes.