The International Trombone Association has several awards it bestows each year. The individual awards are the ITA Award, presented every year to an individual who has greatly influenced the field of trombone, the Neill Humfeld Award, which recognizes outstanding trombone teaching in our profession while honoring the teaching excellence of the late Neill Humfeld, the Legacy Circle Award, for unparalleled accomplishments in the trombone community, the Lifetime Achievement Award, for contributions to the trombone profession over a long career.

The ITA Award recognizes the highest level of creative and artistic output in areas such as performance, composition, arranging, teaching, conducting, research and/or service. 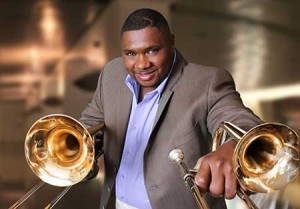 Needing no introduction; Musical ambassador and interpreter of America’s music, Wycliffe Gordon experiences an impressive career touring the world performing hard-swinging, straight-ahead jazz receiving great acclaim from audiences and critics alike. His unmatched modern mastery of the plunger mute and his exceptional technique and signature sound, has solidified Gordon a place in musical history known as one of the top trombonists of his generation.

In addition to an extremely successful solo career, Gordon tours regularly leading his quintet known as Wycliffe Gordon and His International All-Stars, headlining at legendary jazz venues and performing arts centers throughout the world. He is commissioned frequently, and has an extensive catalog of original compositions that span the various timbres of jazz and chamber music. Musicians and ensembles of every caliber perform his music throughout the world and his arrangement of the theme song to NPR’s “All Things Considered” is heard daily across the globe. His show “Jazz a la Carte” was named one of the five best moments in jazz by the Wall Street Journal. Gordon is a former veteran member of the Wynton Marsalis Septet, the Lincoln Center Jazz Orchestra and has been a featured guest artist on Billy Taylor’s “Jazz at the Kennedy Center” Series.

Gordon’s recordings are a model of consistency and inspiration. In 2016, he released his 21st solo CD recording titled “I Give You Love”—a follow up album to his very popular “Hello Pops: A Tribute to Louis Armstrong” cd.   He also released “Within These Gates of Mine,” an original soundtrack and film score for the 1920’s silent film “Within Our Gates” by African-American filmmaker Oscar Micheaux. His arrangement of “Bill Bailey” from his CD “Dreams of New Orleans” on Chesky Records, can be heard in last year’s blockbuster “Race” the biopic of track legend Jesse Owens.

Other releases, “Somebody New,” a big band album featuring the DiMartino/Osland Jazz Orchestra, his “Hello Pops, A Tribute to Louis Armstrong” cd and “The Intimate Ellington: Ballads and Blues” continue to get rave reviews. His musical expertise is sought out by artists across the globe and has been captured on numerous projects and performances with other artists including most recently with David Sanborn. Others include Wynton Marsalis, Paul Simon, Natalie Merchant, Rene Marie, Dianne Reeves, Anat Cohen, Ricky Skaggs, Arturo Sandoval and Doc Severinsen to name a few.

In addition to performing, composing and recording, Gordon is one of Americaʼs most persuasive and committed music educators, and serves as Artist-in-Residence at Augusta University in Augusta, GA.   This year he returns for a residency at Columbia College in Chicago, returns as artist-in-residence at the James Morrison Academy in Australia and continues with Centrum and Vail music camps.

He has published several books including “This Rhythm On My Mind with accompanying CD released in 2012 and “Sing It First”—Wycliffe’s own unique approach to playing the instrument, released in 2011.   His work with young musicians and audiences from elementary schools to universities all over the world is extensive, and includes master classes, clinics, workshops, children’s concerts and lectures — powerful evidence of his unique ability to relate musically to people of all ages.

Wycliffe Gordon is a Yamaha Performing Artist and has his own line of Wycliffe Gordon Pro Signature Mouthpieces by Pickett Brass. His musical compositions including works for trombone ensemble and big band are available for purchase on his website. For additional information visit www.wycliffegordon.com. 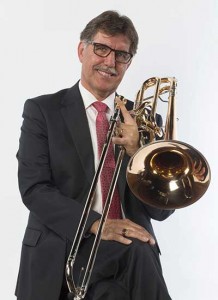 Born in 1955 in The Hague, Ben van Dijk received his first trombone lessons from his father, Piet van Dijk, who at the time was solo trombonist of The Hague Philharmonic Orchestra.

He continued to study with Jeff Reynolds and Roger Bobo in Los Angeles. After 23 years with the N.R.P.O., Ben joined the Rotterdam Philharmonic as solo bass trombonist.

Ben is currently Professor at the Conservatory of Amsterdam.

In March 2014 he was elected First Vice President of the ITA (International Trombone Association).

He has released five solo CD’s, “Nana”, “First Song”, “Melody”, “Never Alone” and “World Concerto” which all received praising reviews in the most important brass/trombone magazines of today.

In recognition of his contributions to the ITA and to the trombone community at large Ben van Dijk was the recipient of the 2003 ITA Award. This award is the ITA’s most prestigious citation and it recognizes Ben’s artistic achievements and his tireless efforts in promoting and improving global trombone performance standards, brass pedagogy, and instrument design.

The Lifetime Achievement Award recognizes people who have distinguished themselves by their contributions to the trombone profession over a long career. 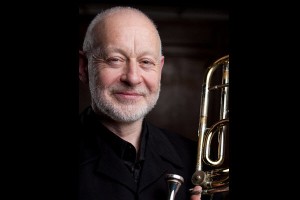 Trombonist and composer John Kenny is internationally acclaimed for his interpretation of contemporary music, having performed and broadcast in over 50 nations to date. He also works extensively with improvisation and early music and is particularly active in collaboration with dance and theatre. In 1983 he began his long collaboration with playwright Paul Stebbings and the TNT Theatre Company performing, composing and directing music for productions which continue to tour worldwide including Cabaret Faust, Tempest Now, The Wizard of Jazz, Moby Dick, Moon Palace, The Taming of The Shrew, Romeo and Juliet, The Mystery of Edgar Allan Poe, The Ghost of Illiam Dhone, The Wave, The life and death of Martin Luther King and The Merchant of Venice. He has also received commissions from London Contemporary Dance Theatre, Huddersfield Contemporary Music Festival, the International Trombone Association, Scottish Chamber Orchestra, Edinburgh Contemporary Arts Trust, Chamber Group of Scotland, Dance Umbrella, St Magnus Festival, BBC Proms in The Park, American Drama Group Europe, The New Haven International Festival of Arts and Ideas (USA) the Festival d’ Angers, (France), Vokal Nord (Norway), CCMIX Institut (France), the Swedish Arts Council, Spanish Brass and the city of Wroclaw (Poland).

John is a professor at both the Guildhall School of Music and Drama in London and The Royal Conservatoire of Scotland. He has lectured and performed at many of the world’s leading institutions, including Juilliard, Manhattan, Peabody and Eastman colleges in the USA, and the conservatoires of Paris, Angers, Angouleme, Bordeaux, Perpignan, Den Haag, Wroclaw, Gdansk, Moscow, Helsinki, Tromso, Munich, Berlin, Cologne, Stuttgart, Hannover, Sofia, Athens, Madrid, Seville, Porto, Tokyo and Beijing.

Since the early 1990’s he has also become increasingly involved with musical archaeology. In 1993 he became the first person for 2000 years to play the great Celtic war horn known as the carnyx. He now lectures and performs on the carnyx internationally in the concert hall and on radio, television and film. In March 2003 he performed his composition “The Voice of The Carnyx” to an audience of 65,000 in the Stade De France, Paris. In 2009 he undertook a month long lecture recital tour of the USA which included the world premier of his composition “Wild Stone” for alto flute and carnyx, and released his seventh solo album, “Embracing the Unknown” for trombone with harp & string quartet.

John Kenny is a founder member of the European Music Archaeology Project (EMAP) with whom he has worked to bring to fruition the reconstruction of many lip reed instruments of antiquity, including the magnificent Tintignac Carnyx, recently discovered in the Correze region of France, and the Etruscan litus and cornu.

Each year the ITA President currently Joseph Alessi is able to give an award to a deserving individual or organisation. This year Joe chose Dee Stewart and Brass for Africa for this honor. 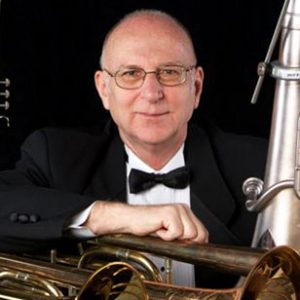 Dee Stewart is a professor of trombone and euphonium at the Indiana University School of Music. Mr. Stewart joined the faculty in 1980 after an 18-year tenure with the Philadelphia Orchestra. In addition to countless recordings, concerts, tours, and telecasts with the Philadelphia Orchestra under Eugene Ormandy and Ricardo Muti, Mr. Stewart made five recordings with the Grammy Award-winning Philadelphia Brass Ensemble. Other recordings include Stewart Sounds: The CDand a Christmas recording, Trombones Under the Tree. Extensive teaching in the Philadelphia area included ten years on the faculty of the Curtis Institute of Music and led to the development of many outstanding trombonists.

Two degrees in music education from Ball State University and Northwestern University, and the tutelage of Arnold Jacobs, give Mr. Stewart a unique musical and pedagogical perspective. In demand as a recitalist, clinician, and orchestral musician nationwide, he plays the alto, tenor and bass trombones, euphonium, and bass trumpet. He has performed on special occasions with the Summit Brass and with the orchestras of  San Francisco, Honolulu, Minnesota, Phoenix, San Antonio, St. Louis, Chicago, Indianapolis, and New York. He is the author of two books, Arnold Jacobs: Legacy of a Master and Philip Farkas: Legacy of a Master, as well as articles appearing in the International Trombone Association Journal, Euphonia and T.U.B.A. Organizer of the 2nd International Brass Conference, he is also the creator of the Stewart Stand for euphonium and tuba. At the International Trombone Festival in Boulder, Colorado, Mr. Stewart was awarded the 1998 Neill Humfeld Award for Excellence in Teaching.

The Brass for Africa story began one Saturday morning in February 2009 when Jim Trott was helping to store 30 rather old and well used brass instruments whilst waiting for his son Angus to finish playing in his Berkshire Maestros junior brass band. On finding that these instruments were surplus to requirements and potentially destined for the scrap heap, Jim, who is a British Airways pilot, set about finding a new home for them on his next duty trip to Kampala.

Jim was introduced to Bosco Segawa, ex street child, trumpet player, founder and Director of the M-lisada Organisation. M-lisada is an orphanage in Kampala that revolves around a brass band and culture dance troop, their motto is Music to the Rescue. Jim was so moved and inspired by the organisation that he returned home to the Bracknell and Wokingham Community band, where he played trumpet, and appealed to the band to raise the funds to ship the instruments to Uganda.

Shortly after, the instruments were delivered to the Good Shepherd Home, an orphanage in the Mengo slum of Kampala that houses and cares for some of the street children and disabled children of the district. Jim then began working with Bosco and Godfrey (the M-lisada music teacher) to provide the children at the Good Shepherd Home with music tuition, and so the story of Brass for Africa began!

More instruments were sourced and through tireless efforts Jim, his family, friends and colleagues (Brass for Africa is now very proud to be a British Airways Community and Conservation Partner) built up the charity.

Working with M-lisada as a local centre the number of projects began to grow and the quality of the M-lisada band developed rapidly, fueled by Jim and Bosco’s passion and the regular visits of UK based players and teachers to the projects.

Through Brass for Africa, Bosco and Jim funded and built a refuge and learning centre for the young girls of the Katwe Slum in Kampala called the Mummy Foundation. The charity was now supporting music, feeding, clothing, education and other needs. Many positive outcomes were beginning to emerge through the charity’s support.