The International Trombone Association has several awards it bestows each year. The individual awards are the ITA Award, presented every year to an individual who has greatly influenced the field of trombone, the Neill Humfeld Award, which recognizes outstanding trombone teaching in our profession while honoring the teaching excellence of the late Neill Humfeld, the Legacy Circle Award, for unparalleled accomplishments in the trombone community, the Lifetime Achievement Award, for contributions to the trombone profession over a long career.

The ITA has great pleasure in announcing winners for awards for 2018.

The ITA Award recognizes the highest level of creative and artistic output in areas such as performance, composition, arranging, teaching, conducting, research and/or service. 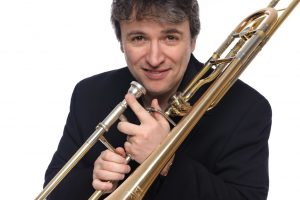 A long-time pedagogue and mentor, Trudel has been instrumental in teaching and guiding new generations of musicians for more than 20 years. He was a tenured professor of trombone and chamber music at the Conservatoire de Musique du Québec à Montréal from 1995-2008 and has served on the faculties or given masterclasses at numerous music festivals and schools including the Conservatoire National Supérieur de Paris, The Juilliard School, New England Conservatory, Hochshule Köln, Hamamatsu Festival, Graz akademie, Italian Brass Week and the University of Hong-Kong. He was Director of Orchestral Activities at Western University from 2012 to 2016 where he also serves on the brass faculty.

Alain Trudel is also one of the busiest conductors on the Canadian scene. He is Music Director of l’Orchestre Symphonique de Laval, Principal Youth and Family Conductor of the Canada’s National Arts Centre Orchestra as well as Principal Guest conductor of the Ottawa Symphony and the Hannaford Street Silver Band. He was also the CBC Radio Orchestra conductor, taking the orchestra to new heights of artistic quality, as well as public and critical acclaim. Trudel has conducted every major orchestra in Canada as well as orchestras in the UK, USA, Sweden, Russia, Japan, Hong-Kong, Malaysia and Latin America with noted artists including Ben Heppner, Anton Kuerti, Measha Brueggergosman, Herbie Hancock, Alain Lefèvre and Pinchas Zukermann. His recordings of Mahler 6th, Mahler 9th and The Rite of Spring have been nominated for juno awards.

Trudel is the recipient of numerous awards and honours, among them the Virginia Parker Prize, Jubilee medal from the Queen of England, the Heinz Unger Prize, the Mildred Dixon Holmes Award. In 2006 he was named an Ambassador of Canadian Music by the Canadian Music Center. 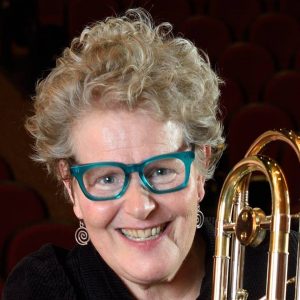 Ava is professor of trombone at the Michigan State University College of Music.

She has extensive orchestral, chamber music, and solo performance experience. Ordman has performed regularly with the Detroit Symphony Orchestra; Michigan Opera Theatre Orchestra; Cabrillo (CA) Music Festival Orchestra; Detroit Chamber Winds; Western Brass Quintet; and American Classic Trombone Quartet. Ordman was principal trombonist with the Grand Rapids Symphony for 24 years prior to moving to the Detroit area to train and work as a psychotherapist; teach low brass at Oakland University; and freelance as a trombonist.

Ordman has been a featured soloist with many orchestras throughout the United States, including her solo debut at Carnegie Hall with The American Symphony Orchestra. She has performed at several International Trombone Association workshops; the International Brassfest in Bloomington, IN; and the First International Women’s Brass conference in St. Louis, MO. She also performed the world premiers of Steven Smith’s “Concerto for Trombone and Orchestra” with the Eugene (Oregon) Symphony Orchestra; and Libby Larsen’s “Mary Cassat” with the Grand Rapids Symphony. Both of these works were commissioned to be performed by Ordman.

She was a finalist in the Concert Artist Guild Competition; The Louise D. MacMahon International Solo Competition; and the International Trombone Competition in Toulon, France. Ordman is featured on a Koss Classics CD of concertos by Donald Erb. She also released a solo CD in 2017, titled, “It’s About Time: Music for Trombone by Women Composers.” She earned her B.M. and M.M. in trombone performance from the University of Michigan, and her MA in Counseling Psychology from Western Michigan University.

The Lifetime Achievement Award recognizes people who have distinguished themselves by their contributions to the trombone profession over a long career. 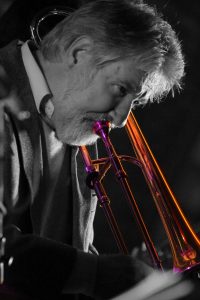 Jiggs Whigham is an internationally acclaimed trombonist, band leader and educator. This versatile performer, born Oliver Haydn Whigham III (the nickname Jiggs was given by his grandfather) in Cleveland Ohio on 20 August 1943, first came to the attention of critics and fans at 17, as featured soloist and first trombonist with the Glenn Miller Orchestra, directed by Ray McKinley. Two years later, he was first and solo trombonist with Stan Kenton. Following a year of studio and Broadway Musical engagements in New York, he became featured soloist with the Kurt Edelhagen Jazz Orchestra at the West German Broadcasting Company in Cologne, Germany in 1965. In 1966 his was awarded 1st Prize at the first competition for Modern Jazz in Vienna. He uses Bonn, London and Cape Cod as home bases, In 1979 he was named Professor and Head of the Jazz Department at Cologne University College of Music, the first appointment of its kind in Germany. In 1995 he was named “Professor for Life” and head of the Jazz-Popular Music Department at the “Hanns Eisler” College of Music in Berlin. From 2000-2001 he was visiting professor at Indiana University. He was bandleader of the Swiss Radio Band (Radio DRS) from 1984-1986. From 1995-2000 he was chief conductor and artistic director of the Berlin Radio Orchestra (RIAS Big Band Berlin).​ He is currently soloist and clinician worldwide, conductor of the BBC Big Band in Great Britain, artistic director of the Berlin Jazz Orchestra and visiting tutor at the Royal Northern College of Music in Manchester, England. He is musical director of the LaJJOB (Brandenburger Youth Jazz Orchestra) and artistic director of the BUJAZZO (german jazz orchestra). Jiggs Whigham is President Emeritus of the International Trombone Association (ITA). He is also a lifetime member of the ITA, the British Trombone Society (BTS) and the German Trombone Society (IPV). Jiggs Whigham is active as a soloist, conductor, composer, author and educator.

The Legacy Circle recognizes individuals who have made a profound and lasting impact on the evolution of trombone playing.

Maisie passed away in the UK in December 2016 aged 92. A life-long Salvationist and former principal trombone of the Halle Orchestra under Sir John Barbirolli from 1945-55, Maisie Ringham Wiggins gained worldwide respect as a performer and inspirational teacher. She began playing at the age of 10, under the guidance of her father and soon became known as ‘The Wonder Girl Trombonist’ for her remarkable performances in Salvationist concerts. She was awarded a scholarship to study at the Royal Manchester College of Music and following her studies, successfully auditioned to become principal trombone of the BBC Midlands Light Orchestra. Just over a year later she was invited by personal telegram by Sir John Barbirolli to join the Halle Orchestra — enabling her to fulfil an ambition that she had held from childhood. Three ground breaking solo recordings were made of her in 1946 whilst she was a member of the Salvation Army and much later composers such as Erik Leidzen and Ray Steadman Allen’s wrote solo compositions for her. In 2010 she was awarded the MBE for services to music and in November 2016 Maisie was presented with the Sheila Tracy Award by the British Trombone Society in recognition of contribution to the musical world — an award she accepted with her usual modesty by saying she accepted it “on behalf of all female trombonists, everywhere!”

Sheila Tracy a broadcaster and musician was the first woman to read the news on BBC Radio 4 and presented Radio 2’s Big Band Special, died aged 80 in 2016.

A trombonist, she first found fame as part of the musical duo The Tracy Sisters before becoming a TV announcer. She joined Radio 4 in 1974 and moved to Radio 2 three years later, gaining a cult following with her overnight Trucker’s Hour in the early 1980s. She went on to spend 21 years as the voice of Radio 2’s Big Band Special. She worked as a regional TV presenter in Plymouth, Bristol and Southampton. Born in Cornwall in 1934, Tracy was among the last in-vision announcers on BBC television before becoming one of the earliest presenters of regional TV news in south-west England. In the 1960s she also hosted BBC One’s A Spoonful of Sugar, which took celebrities to surprise hospital residents, and commentated on the Miss England contest for four years. On BBC Radio’s Light Programme, she presented music programmes in the 1960s before moving to newsreading on Radio 4. After being given her own three-hour overnight programme on Radio 2, she made the hour from 01:00 to 02:00 Trucker’s Hour, inviting correspondence from truck drivers. She later said the response was so big that it was “the most successful show I’ve ever done” – but some of the CB slang she innocently relayed caused consternation among the BBC hierarchy. In 1979, she introduced the first Big Band Special and went on to present hundreds of concerts from around the world for the next 21 years. BBC Radio 2 controller, Bob Shennan, said: “Sheila was a wonderful broadcaster with an extensive knowledge and love of big band music. In recent years, Tracy hosted a show that was broadcast on US station Pure Jazz Radio and charity AgeUK’s digital station The Wireless. She was married to the actor John Arnatt, who died in 1999.

Each year the ITA President currently Ben van Dijk is able to give an award to a deserving individual or organisation. This year ben chose Jeff Reynolds for this honor.

Bass Trombonist ​Jeff ​is a graduate of California State University, Long Beach (BM,1967) and was bass trombonist with the Los Angeles Philharmonic from 1969 until 2006. During these years he has performed under Music Directors Zubin Mehta, Carlo Maria Giulini, Andre Previn, Esa-Pekka Salonen, and guest conductors​ such as Vladimir Ashkenazy, Pierre Boulez, Erich Leinsdorf, Simon Rattle, Kurt Sanderling, Yuri Temirkanov, and Franz Welser-Most. He has been a regular speaker at the concert preview series, “Upbeat Live” with the Philharmonic.

His experience includes performing with most of the symphony orchestras ​within​ the Los Angeles area. Mr. Reynolds has been a member of the Summit Brass, California Brass Quintet, the L.A. Brass Society and the Hollywood Trombones. He has been heard on soundtracks for all of the major film studios and has performed on recordings for labels such as, CBS/Sony Classical, Crystal, Deutsche Grammophon, London, Philips, RCA Red Seal, Sheffield Lab, Summit Records, and Telarc. Reynolds has long been a champion of the Moravian Trombone Choir and was music director of the group for 25 years. He teaches, composes and arranges music and is now involved with four Compline Choirs in retirement in Nevada City, CA. His hobbies include model trains, truck camping, and Jeeping.

P​resident Ben van Dijk commented “I had the great pleasure of studying with Jeff in the mid 80’s. Two intense summers in Los Angeles enjoying Jeff’s tameless energy, his knowledge of the (bass) trombone, music in general, his inspiration and for his friendship.​ I received a “musical-health” diet during two long Californian summers under the direct coaching of Jeff himself. The knowledge I learned was a turning point in my musical life. With this President’s Award I like to honor a great person and musician who has done so much for so many trombone lovers like myself.​”​