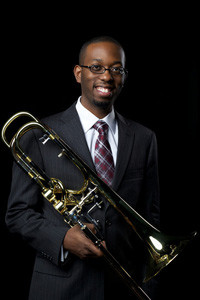 Known for his musical expression and warm sound, trombonist Martin McCains career as a musician spans an impressive scope of genres. A third-generation musician, he maintains a versatile performance schedule. As a soloist, Dr. McCain has appeared with numerous ensembles and performs recitals throughout the country and abroad. His performances and arrangements have been broadcast on Austins 89.5 KMFA and Tucsons 90.5 KUAT Classical radio stations. McCain has performed as a guest artist at the International Trombone Festival and Eastern Trombone Workshop on several occasions. He is a founding member and leader of the highly acclaimed, award-winning jazz trombone ensemble, JazzBonez, who has been featured at several major conferences including the International Trombone Festival and the Eastern Trombone Workshop. As a chamber musician, Dr. McCain is also a founding member of the Minor 4th Trombone Quartet. As an orchestral musician, McCain performs with the Laredo Philharmonic Orchestra and has also performed with the Austin Symphony Orchestra, Austin Lyric Opera, Victoria Symphony Orchestra, Brazos Valley Symphony, Meridian Symphony Orchestra, Mississippi Symphony Orchestra and San Antonio Opera. As a jazz musician, he has performed with the Vendetta Big Band, Monster Big Band, Contemporary Works Jazz Orchestra and other commercial touring bands. McCains 2012-2013 performance season includes appearances in Kentucky, Colorado, Iowa, Virginia and China as well as performances at the 2013 Eastern Trombone Workshop and International Trombone Festival.

An active member of the International Trombone Association, Dr. McCain serves as the Events Coordinator for the ITA website and state representative for the ITA TAPAS (Trombone Artists Performing for Amateurs and Students) Project. He also writes CD reviews for the Audio Visual column of the quarterly Journal. A promoter of music education in the public schools, McCain is the co-director for Raise The Bar a concert series dedicated to educating young classical music audiences. McCain has taught in the Austin, Round Rock, and Eanes Independent School Districts and is in demand as a clinician. Dr. McCain was selected to choose the All-State bass trombone repertoire for the state of Texas and presented a performance clinic at the Texas Bandmasters Association Convention in San Antonio. As a scholar, McCain contributed four articles for the New Grove Dictionary of American Musicians. In 2012, McCain founded his own record label and publishing company Kairoi Music.

Dr. McCain joined the faculty at Texas State University in 2010 where he directs the Trombone Choir, Jazz Trombone Ensembles, and Jazz Lab Band as well as maintaining an active performing trombone studio. Under his direction, the Trombone Choir and Jazz Trombone Ensembles have been invited to perform at the Big 12 Trombone Conference and Texas Music Educators Association Convention on numerous occasions. Since his arrival, McCain has been responsible for hosting over a dozen of the worlds greatest trombone artist teachers and is the founder/director of the Texas State Trombone Symposium. McCain has also served as an adjudicator for the Yamaha Xeno Tenor Trombone Solo Competition, the Edwards Bass Trombone Solo Competition, Fort Worth Trombone Summit Quartet Competition and the Texas All-State Jazz Ensemble on several occasions.

McCain was a prize – winner at the International Trombone Festival and Eastern Trombone Workshop competitions as a soloist and ensemble musician. Dr. McCain can be heard on his debut EP Trombone Czar: Russian Treasures Recorded Live! the JazzBonez album Watch It! and the Willie Nelson movie, Fighting With Anger.

Martin McCain is an artist/clinician for Michael Rath Instruments.