Congratulations to all the winners and finalists of the 2021 ITA Solo & Ensemble Competitions on their performances at the International Trombone Festival, held at Columbus State University on July 14-17, 2021. 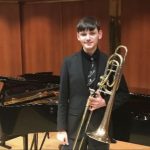