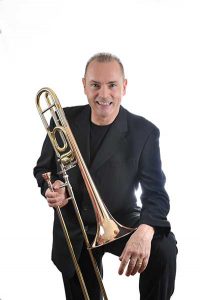 Jacques Mauger was born in Normandy and studied the trombone at the Regional Conservatoire in Rouen and subsequently at the Conservatoire National Supérieur de Musique de Paris. A prize-winner at international competitions in Markneukirchen and Toulon, he started his professional career as first trombone with the Nice Philharmonic Orchestra, and then became trombone soloist with the Paris Opera Orchestra.

Since 1990, he has concentrated on working as a concert artist and has often appeared as a soloist in France and abroad with ensembles varying from string and symphony orchestras to brass and concert bands. He has also made television appearances on ZDF, GLOBO, RAI and MUZZIK in France and has broadcast on RFI, France Inter, France Musique, France Info and the BBC. Many international composers have written original works or arranged especially for him.

Jacques taught at the Accademia Santa Cecilia di Roma, Italy for three years and has taught at the Conservatoire à Rayonnement Régional de Paris since 1994. In 2004 he was appointed trombone professor at H.E.M. Neuchatel Switzerland, and since 2012 has served as professor at HEMU of Lausanne in Fribourg. He is also guest professor at the Senzoku Gaquen University of Tokyo, Japan. He has presented masterclasses in numerous countries including France, UK, Japan, Korea, China, Spain, Germany, Switzerland, Holland, United States and South America. In 2007 his newly developed studies collection for trombone (in collaboration with Jean Michel Defaye) was published by IMD Arpèges publications in Paris and he also developed the new AC440 trombone model in Antoine Courtois Paris brass factory.

As the new president of the Association des Trombonistes Français he fulfills a role as a true ambassador of the French school and its repertoire, regularly presenting masterclasses throughout the world for the soloists of tomorrow.