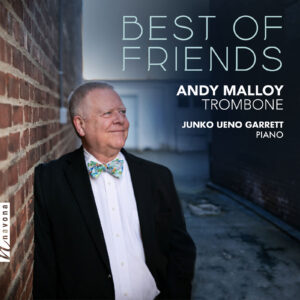 Andy Malloy has re-released his first solo album, Best of Friends, in an all-digital format. The album was originally released in 2005 as a CD.The new version has been produced by Parma Recordings on their Navona label. The album includes works by Jack Hayes, John Stevens, Jim Self, Stanley Friedman, N. Lincoln Hanks, and Robert Marsteller.

His second album, Paper Clips, is also available in digital format from Parma. These albums are also available from Apple Music, Spotify, and Amazon Music.