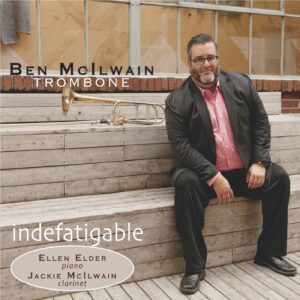 Trombonist Ben McIlwain’s solo debut album, “indefatigable,” has dropped! The album includes recordings of the following works for trombone that he commissioned:

Ellen Elder performs as collaborative pianist on all pieces except for the Mize. The recording engineer was Andy Gilstrap, producer was Nick Laufer, mixing/mastering was done by TJ Tesh, and project manager was Karen Cubides. Many of these recordings will be world premiere recordings.

For further information on McIlwain and his debut album, please visit his website.