Francois Bogaert has recently accepted the position of Professor of Trombone at the Conservatory of Music in Cambrai, France. 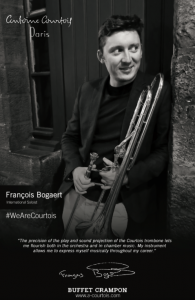 Born in Northern France, Francois began studying music under the watchful eye of his grandmother and his father in the Calonne Ricouart Music School. He naturally chose the trombone and quickly joined the CRR of Lille in Christian Bogaert’s class. Alongside his trombone studies, Francois learned percussion, double bass and piano. He also studied conducting and analysis in the CRR of Douai with Pierre Vigneron.

Francois has participated as Solo Trombone in the National and European Brass Band Championships with the Brass Band Nord Pas de Calais since 2010. In 2016 Francois was selected for the Prestigious Soloist Contest of the European BrassBand Association in Lille. François has also been a member of the teaching team and is an arranger for the largest European Trombone Festival, Lille Trombone Festival, since 2011.

After a gold medal at the CRR of Lille and CRR of Boulogne Billancourt, François was admitted to Conservatoire National Supérieur Musique in Paris in the class of Giles Millière.  Francois continued his musical studies with Michel Becquet in Lyon. After earning a Bachelor’s Degree in 2013, François obtained his Master’s Degree in June 2015 with the dissertation topic : “Silly Symphonies of Walt Disney.” He also earned many honors in the Orchestration Class of Luca Antignani at the Conservatoire National Supérieur Musique in Lyon.

He has performed with with Lille National Orchestra, Orchestre National de Lyon, Orchestre de l’Opera de Lyon, Orchestre de Douai, Ensemble Instrumental of the Ariege, Orchestra of the Opera of St-Etienne, SoCal Brass Consortium of Los Angeles, Downey Symphony, Burbank Philharmonic and Bervely Hills Symphony. He made his debut at the Walt Disney Concert Hall, prestigious home of the Los Angeles Philharmonic, with the USC Thornton Symphony in 2017.

François graduated from the prestigious University of Southern California Thornton School of Music in Los Angeles where he has perfected the profession of orchestral music.

François won the award of Young Talent Adami Scholarship and he is a Performing Artist with Antoine Courtois USA.