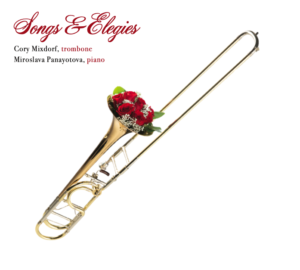 Cory Mixdorf, along with pianist Miroslava Panayotova, proudly offers his first solo album, aptly titled Songs & Elegies. With the aim of creating an album that mostly focuses on the cantabile side of the instrument, the repertoire is split into three categories: vocal pieces, elegies, and other song-related works.

Mixdorf uses vocal repertoire often in performance and pedagogy. These “song-stories sung through the trombone” include:

The three elegies recorded here include two original works by Joe Buono and Anthony Barfield, as well as a transcription of Alexander Glazunov’s Élégie, Op. 44, originally written for viola.

The final category are pieces originally written for the trombone that are very song-oriented. Norman Bolter’s The Song of King David depicts the life and struggles of the Old Testament king. Ross Wixon composed The Troubadour in 2011, and harkens back to the medieval singer/poets, but set in a modern harmonic texture. Finally, Susan Mutter’s Song of Survival was written in 2021 as a reflection of Mixdorf’s son’s journey through treatments for medulloblastoma, a form of brain cancer.

Songs and Elegies is available on all major streaming music platforms. If a hard copy CD is desired, please contact Cory Mixdorf. This album was funded in part by a Seed Grant at the University of Arkansas, where Mixdorf serves as the Associate Professor of Trombone. Cory Mixdorf is a Greenhoe Trombones Featured Artist.