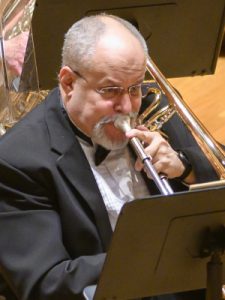 After a 41 year tenure, Elliot Chasanov is retiring as Professor of Trombone at the University of Illinois at Urbana-Champaign. Highlights include hosting the 1997 ITA festival, solo tours to Austria, Belgium, Canada, France, Germany, Poland, and placing students in major orchestras, DC bands, college and public school positions. He started his career as Principal Trombonist of the USAF Band in Washington DC, followed by a 6 year term on the faculty of Kent State University. Chasanov spent 10 years as principal trombone of the Illinois Symphony, Champaign-Urbana Symphony and has subbed with the Cleveland Orchestra, Milwaukee Symphony, National Symphony, and Ohio Chamber Orchestra, Opera and Ballet.

-Written and submitted by Elliot Chasanov