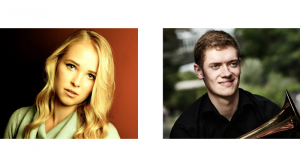 Peter Moore, principal trombone of the London Symphony Orchestra, will give the world premiere of Dani Howard’s Trombone Concerto with the Royal Liverpool Philharmonic on June 17, 2021. The program will be recorded and available to stream on June 29, 2021 for a small fee.

Mr. Moore joined the LSO in 2014. He gained national attention by becoming the youngest winner of the BBC Young Musician competition in 2008. In addition to performing, he teaches at the Royal Academy of Music and Guildhall School of Music and Drama.

Ms. Howard is a British composer and orchestrator who is gaining international recognition with performances of her music across Europe, the US, and Asia. In addition to the trombone concerto, Ms. Howard is looking forward to commissions with the National Youth Orchestra of Great Britain, City of Birmingham Symphony Orchestra, Britten Sinfonia, the Marian Consort, Apollo Saxophone Quartet, and other projects that will be announced shortly.

Please visit the Royal Liverpool Philharmonic’s website if you are interested in purchasing tickets to the concert or livestream.