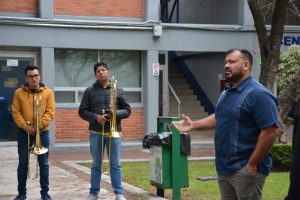 Last June, the University Trombone Biennial took place at the Faculty of Music of the UNAM, located in Mexico City.

More than 60 participants from all over the country gathered to participate in this event. Featured guest artists include Blair Bollinger, bass trombone of the Philadelphia Orchestra, and Dr. Oscar Diaz, Professor of Trombone at Texas A&M University of Kingsville.

Among the Biennial’s activities were the concerts offered by the Glissando Trombone Ensemble, which performed several world premieres of works dedicated to them by Mexican composers, a recital by Mr. Bollinger, and the tenth anniversary concert of the FaM Trombone Ensemble conducted by Professor Marcia Medrano.

The final concert featured the participants and guest artists. Dr. Oscar Diaz conducted the Trombone Ensemble of the SBUT.

The biennial is an event highly anticipated by the entire community of Mexican trombonists as it is an opportunity to meet and grow as musicians for all who attend.

Due to the pandemic, the number of participants was reduced, but the organizers, Mauricio Fortuna and Marcia Medrano, say that they hope to open the doors to all those interested in the next edition of the festival in 2024.

Submitted by Marcia Medrano, Professor of Trombone at UNAM 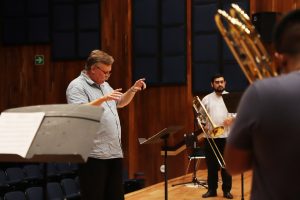