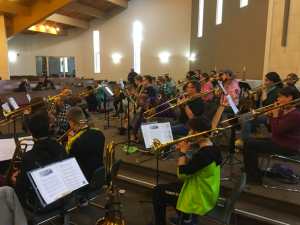 On Sunday Apr 3, the 9th annual Slide Into Spring: Calgary’s Trombone Day was an amazing success on a number of levels!

After two long years, Calgary’s Trombone Day occurred in person. About 40 trombone players got together to be led through a warm-routine by Calgary Philharmonic Principal Trombonist, James Scott. The event allowed students to participate online as well, leading to the the Slide Into Spring #hybrid edition.

Gareth Jones, Director of Bands and Associate Professor of Trumpet at the University of Calgary rehearsed the entire ensemble through several pieces – most notably Ukraine’s National Anthem.

Dave Reid, Principal Bass Trombone with the Calgary Philharmonic gave us all kinds of incredible trombone wisdom – in particular around the history and development of the… you guessed it: bass trombone! The day also included a chance to simply catch up, ask questions and talk “all things trombone.”

A mini-concert was held at the end for friends and family, including a virtual performance of “Andante Ritmico” from Malcolm Forsyth’s Trombone Quartet.

But what was really the special announcement was that Calgary was going to host the Belgian Trombone Quintet “Crossbones” and a concert would be presented on Friday April 15!

The event was streamed on YouTube and can be viewed here.

As a special treat, the end of the event announced that Crossbones Trombones would be performing in Calgary. They delighted audiences in the Calgary region with their mix of jazz, classical and even some pop tune arrangements!

Their program included jazz standards like “Bluesette” by Toots Thielemans, John Williams’ “Olympic fanfare,” as well as music from around the world! The full program can be viewed here.

This was not only a wonderful event, but also a reminder of the power of live music! We look forward to our next trombone day and getting to make new friends from across the world, as well!

Special thanks to the Calgary Association for the Development of Music education (CADME) for their generous support!  www.cadme.ca

Thank you to Nathan Gingrich for the write up and article submission. 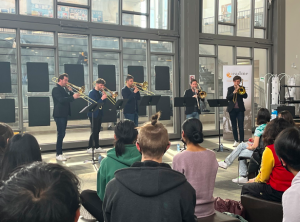