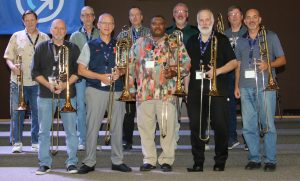 Over Memorial Day weekend 2022, 51 alumni of the McDonald’s All-American High School Band from 32 states gathered for a reunion and performances as the All-American Alumni Band (established in 2019). Between 1967 and 1992, McDonald’s Corporation selected two high school seniors from each state and Washington DC, Puerto Rico, and the US Virgin Islands, to form a marching band that participated in the Macy’s Thanksgiving Day Parade in New York City and additional performances including the Tournament of Roses Parade in Pasadena, California, and concerts in Carnegie Hall, Chicago’s Orchestra Hall, and many other venues. Conducted by Dr. Russel Mikkelson, director of bands at The Ohio State University, the band gave a concert on the Town Green in Worthington, Ohio where Wycliffe Gordon was the featured soloist and the band also collaborated with the Worthington High School jazz ensemble. The All-American Alumni Band also marched in the 102nd Worthington Memorial Day Parade.

For more information about the All-American Alumni Band, visit www.AllAmericanAlumniBand.org.