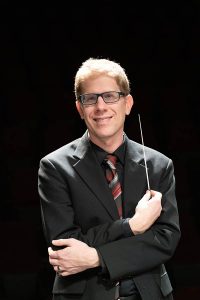 Ryan Webber is a professional trombonist, conductor, and educator based out of Bemidji Minnesota. He received a Bachelor of Music from the University of California, Irvine, studying under David Stetson, and a Master of Music from the University of Kansas, studying under Dr. Michael Davidson. Additional studies have been completed with Michael Hoffman, Jim Kraft, and Graeme Mutchler.

As an orchestral musician, Ryan has performed with the Bemidji, Heartland, Southeast Kansas, Kansas City Civic, and Corona Symphony Orchestras. In addition to performances around the United States, he recently toured China with the MasterWorks Festival Orchestra. Some artists he has performed with include Natalie Cole, Bill Watrous, Jim Oatts, and Michael W. Smith.

Ryan also maintains an active schedule as a conductor. He became Music Director of the Heartland Symphony in 2019. During the summers, he serves as Music Director and Vocal Coach for the Northern Light Opera Company. Other groups Ryan has worked with include Bemidji Area Concert Band, Lawrence Youth Symphony, Youth Orchestras of Kansas City, La Primavera Youth Orchestra, and Community Youth Orchestra of Southern California.

When Ryan isn’t performing, he enjoys sharing his passion for music with students of all ages. Ryan has served on the faculty of Bemidji State University since 2017, where he teaches lessons, low brass methods, and directs the Bemidji Trombone Choir and Symphonic Band. He has given preconcert lectures for the Minnesota and Indianapolis Symphony Orchestras, and has written program notes for soloists and ensembles of all sizes, including releases for Naxos. As an administrator, he is the Online News Coordinator for the International Trombone Association.