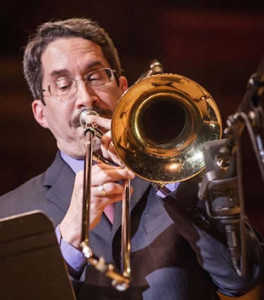 Antonio J. García is an Associate Professor of Music and Director of Jazz Studies at Virginia Commonwealth University, where he directs the Jazz Orchestra I, instructs Applied Jazz Trombone, Small Jazz Ensemble, Music Industry, and various jazz courses, founded the B.A. Music Business Emphasis, and directs the Greater Richmond High School Jazz Band. An alumnus of the Eastman School of Music and of Loyola University of the South, he has received commissions for jazz, symphonic, chamber, and solo worksinstrumental and vocalincluding grants from Meet The Composer, The Commission Project, The Thelonious Monk Institute, and regional arts councils. His music has aired internationally and has been performed by such artists as Sheila Jordan, Arturo Sandoval, Jim Pugh, Denis DiBlasio, James Moody, and Nick Brignola. Composition/arrangement honors include IAJE/jazz band, ASCAP/orchestral, and Billboard Magazine/pop songwriting. His works have been published by Kjos Music, Kendor Music, Doug Beach Music, Walrus, UNC Jazz Press, ThreeTwo Music Publications, and his own garciamusic.com, with five recorded on CDs by Rob Partons JazzTech Big Band on the Sea Breeze and ROPA JAZZ labels.

A Bach/Selmer trombone clinician, Tony has freelanced as trombonist, bass trombonist, or pianist with over 70 nationally renowned artists, including Ella Fitzgerald, George Shearing, Mel Tormé, Doc Severinsen, Louie Bellson, Dave Brubeck, and Phil Collinsand has performed at the Montreux, Nice, North Sea, Pori, New Orleans, and Chicago Jazz Festivals. He has produced recordings or broadcasts of such artists as Wynton Marsalis, Jim Pugh, Dave Taylor, Susannah McCorkle, Sir Roland Hanna, and the JazzTech Big Band and is the bass trombonist on Phil Collins CD A Hot Night in Paris on the Atlantic label and DVD Phil Collins: Finally…The First Farewell Tour on the Warner Music label. An avid scatsinger, he has performed vocally with jazz bands, jazz choirs, and computergenerated sounds. He is also a member of the National Academy of Recording Arts & Sciences. A New Orleans native, he also performed there with such local artists as Pete Fountain, Ronnie Kole, Irma Thomas, and Al Hirt.

Tony is Associate Jazz Editor of the International Trombone Association Journal. He serves as a Network Expert for Improvisation Materials for the Jazz Education Network and has served as Presidents Advisory Council member and Editorial Advisory Board member. His book, Cutting the Changes: Jazz Improvisation via Key Centers/Kjos Music offers musicians of all ages the opportunity to improvise over standard tunes using just their major scales. He is CoEditor and Contributing Author of Teaching Jazz: A Course of Study/MENC. Within the International Association for Jazz Education he served as Editor of the Jazz Education Journal, President of IAJEIL, International CoChair for Curriculum and for Vocal/Instrumental Integration, and Chicago Host Coordinator for the 1997 Conference. He served on the Illinois Coalition for Music Education coordinating committee, worked with the Illinois and Chicago Public Schools to develop standards for multicultural music education, and received a curricular grant from the Council for Basic Education. He has also served as Director of IMEAs AllState Jazz Choir and Combo and of similar ensembles outside of Illinois. He is the recipient of the Illinois Music Educators Associations 2001 Distinguished Service Award.

A member of the board of The Midwest Clinic, Tony has adjudicated festivals and presented clinics in Canada, Europe, Australia, The Middle East, and South Africa, including creativity workshops for Motorola, Inc.s international management executives. The partnership he has created between VCU Jazz and the Centre for Jazz and Popular Music at the University of KwaZuluNatal merited the 2013 VCU Community Engagement Award for Research. He has served as adjudicator for the International Trombone Associations Frank Rosolino, Carl Fontana, and Rath Jazz Trombone Scholarship competitions and the Kai Winding Jazz Trombone Ensemble competition and has been asked to serve on Arts Midwests Midwest Jazz Masters panel and the Virginia Commission for the Arts Artist Fellowship in Music Composition panel. He has been repeatedly published in Down Beat, JAZZed, Jazz Improv, Music, Inc., The International Musician, The Instrumentalist, and the journals of MENC, IAJE, ITA, American OrffSchulwerk Association, Percussive Arts Society, Arts Midwest, Illinois Music Educators Association, and Illinois Association of School Boards. He is also the subject of an extensive interview within Bonanza: Insights and Wisdom from Professional Jazz Trombonists/Advance Music.

Previous to VCU, he served as Associate Professor and Coordinator of Combos at Northwestern University, where he taught jazz and integrated arts, was Jazz Coordinator for the National High School Music Institute, and for four years directed the Vocal Jazz Ensemble. Formerly the Coordinator of Jazz Studies at Northern Illinois University, he was selected by students and faculty there as the recipient of a 1992 Excellence in Undergraduate Teaching award and nominated as its candidate for 1992 CASE U.S. Professor of the Year, one of 434 nationwide. Visit his web site at www.garciamusic.com and email him at ajgarcia@vcu.edu.