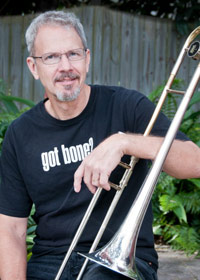 Bruce Gunia grew up near Pittsburgh, PA, and like many people, came to the trombone because he showed up for grade school band without an instrument. He played all through high school but put the horn aside while working his way through college. During an undistinguished public service career, he returned to his horn as a way to cope with occupational stress and became an enthusiastic amateur trombonist of modest abilities.
When he retired in 2004, Bruce moved to Florida and enrolled at the University of South Florida where he studied with Professor Tom Brantley and earned a degree in music. He is now a well trained trombonist of modest abilities and free lances in the Tampa Bay area.