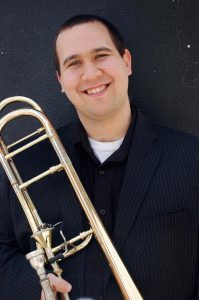 Dr. Louis Setzer is the Lecturer of Low Brass at Northern Kentucky University (NKU).At NKU Louis teaches applied low brass lessons, aural skills and music theory. He previously served as the Instructor of Low Brass at Marian University in Indianapolis, where he directed the Pep Band, taught low brass lessons, music theory, aural skills, and served as brass staff for the concert and marching bands. Louis is the author of Solo Literature for Trombone and Harp – An Annotated Bibliography. This book contains information on over 200 solos, transcriptions, trios, quartets and chamber works featuring the trombone and harp. In 2017, he and harpist Joseph Rebman formed the JOLO Duo. Their mission is to raise awareness for this genre
of music through performance, and collaboration of new works. JOLO Duo released their debut album in February 2020, JOLO Duo: The Bounds of Spring. It features eight previously unrecorded works for trombone and harp, including works that were commissioned and composed for JOLO Duo. They maintain an active schedule, and have been invited to perform at international festivals and universities throughout the country. Louis holds a D.M.A. from The University of Cincinnati College-Conservatory of Music (CCM) where he studied with Timothy Anderson and Peter Norton. He earned his M.M. at The Pennsylvania State University, as the graduate teaching assistant for Mark Lusk. He earned his B.M.E. in Music Education from Mansfield University of Pennsylvania, where he studied with Stephen McEuen.