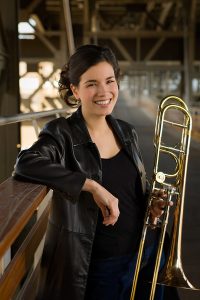 Megumi Kanda, principal trombone of the Milwaukee Symphony Orchestra, is a native of Tokyo, Japan. Coming to the US in 1994, she received her B.M. degree from the Cleveland Institute of Music. Prior to joining the Milwaukee Symphony in 2002, she served as a member of the Rochester Philharmonic Orchestra, faculty member of the Eastman School of Music Community Education Division, and principal trombonist of the Albany Symphony Orchestra.

As a JVC/Victor Entertainment artist, Megumi has recorded three solo albums: Amazing Grace, Gloria, and Mona Lisa. She has premiered three works written for her by Amy Mills, Bruce Stark, and Geoffrey Gordon.

In 2006, Megumi was recognized by the Arion Foundation in Japan as one of the most influential Japanese classical artists. She also received a Certificate of Commendation from the Consul General of Japan at Chicago in recognition for distinguished service contributing to the friendship between the United States and Japan.

Her first book, The One Hundred, a comprehensive trombone orchestral excerpt book with commentary, was published by Encore Music Publishers in 2015. Megumi is a Greenhoe clinician and performs on a Greenhoe trombone.