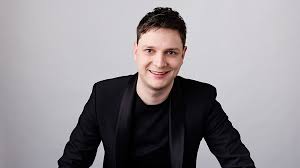 On May 13, 2022, the Adelaide Symphony Orchestra will perform the world premiere of Joe Chindamo‘s Ligeia – Concerto for Trombone and Orchestra. Colin Prichard, principal trombone, will be the soloist. The concert also includes music by Respighi, Sibelius, and Illean.

Ligeia was commissioned by the ASO. Written in three movements, the concerto is influenced by the works of Edgar Allen Poe (Ligeia is the title of one of Poe’s earliest stories). The piece deals with the nature of duality, which is a central theme in much of Poe’s writings. This is heard as the piece alternates between tonal and atonal sections, as well as sections that alternate between full orchestra and minimalist passages.

Prichard has served as principal trombone of the ASO since 2018. He has performed with many ensembles throughout Europe and Australia.