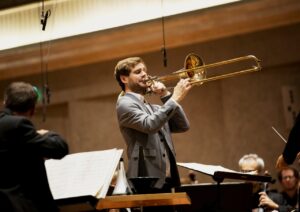 Kris Garfitt of Great Britain, Solo Trombonist of the WDR Symphony Orchestra, won first prize and the audience prize at the prestigious ARD International Music Competition. Founded in 1952, the competition invites young musicians from around the globe to compete in multiple rounds; works performed range from world premieres to standard compositions for trombone and piano, culminating in a final round with the Symphonieorchester des Bayerischen Rundfunks.

Jonathon Ramsay of Australia won 2nd prize, while Roberto de la Guía Martínez of Spain won 3rd prize. At the time of this posting, all rounds are available to stream here.

Garfitt graduated from the Guildhall School of Music and Drama in London in 2015. From 2016 to 2020, he was a member of the German Radio Philharmonic. In addition to his orchestral career, Garfitt has appeared as a featured soloist with numerous professional ensembles and maintains an active career as a chamber musician.