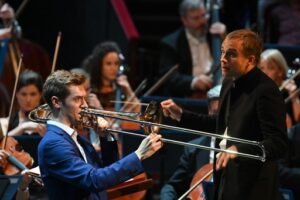 On August 16, 2022, Peter Moore became the first trombonist in over 20 years to be featured as a concerto soloist at the BBC Proms. Moore performed George Walker’s Trombone Concerto, which was composed in 1957. Moore performed with the Royal Philharmonic Orchestra under the baton of Vasily Petrenko. The concert opened with Aaron Copland’s Appalachian Spring and closed with Sergei Prokofiev’s Symphony No. 5.

The program can be heard in its entirety here. The concerto starts at approximately ’28:35.’

Moore was the winner of BBC Young Musician of the Year in 2008 when he was only 12 years old, and is the youngest winner of the competition to date. In 2014, Moore was appointed co-principal trombone, the youngest ever member of the orchestra.

George Walker was the first African-American composer to win the Pulitzer Prize for Music. He published over 90 works, and was commissioned by the New York Philharmonic, Boston Symphony, Cleveland Orchestra, Philadelphia Orchestra, and many other ensembles. During his storied career, he was awarded six honorary doctorates.